A Super Bowl of Red 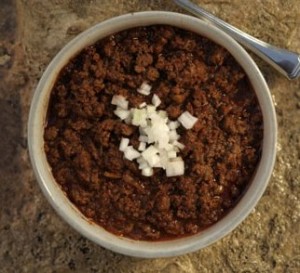 A Super Bowl of Red

Over the next few weekends millions of people will don foam headgear, revive friendly rivalries and consume food in fellowship as the spectacle of the American football match draws to its yearly conclusion. Cheeseheads and Stillers fans will approach tables bending under platters of hot wings, pulled pork will cozy up to sourdough rolls and seven-layer bean dip will be reverently presented to the assembled throng. But no Super Bowl buffet table can be taken seriously or be considered “dressed for the game” without a truly great pot of chili. 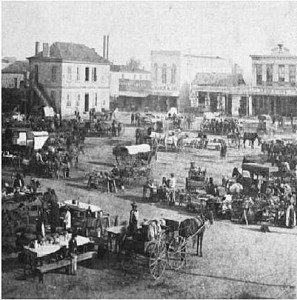 This sublime marriage of stewed meat and spicy gravy featuring chile pequin (and other) peppers, onion, cumin, oregano and garlic was born of the Spanish stews served nightly by coquettish Tejano “Chili Queens” in San Antonio’s market square until the 1940’s. Flickering mesquite fires, gaily decorated wagons and strolling guitarists (older brothers charged with guarding the flower of virtuous youth) created a festive atmosphere that drew people from all walks of life for the evening paseo. Clergymen wary of a purported propensity to arouse ardor preached sermons condemning this “soup of the devil”. A complete historical perspective on the fiery “bowl of red” that growed up with the Lone Star State’s famous cattle drives and prison kitchens over the last hundred years may be found at http://whatscookingamerica.net/History/Chili/ChiliHistory. Legend has it that Frank and Jesse James decided not to rob Fort Worth because the chili con carne was so good and that should count for something.

Chili gained national prominence during the Johnson presidency of the 1960’s with a Pedernales River recipe that omitted the suet tradtionally used to sear the meat, added tomatoes and suggested leaving it overnight to “contemplate its fate”. Since that time a national cook-off circuit has developed in which I competed several decades ago to no one’s notice. Many regional variations exist including an embarassment to Cincinnati that features cinnamon and allspice served over pasta with oyster crackers. A similar thin tragic concoction can be found atop hot weiners right here in our own capital city.

The best chili beef to make angels weep isn’t in the fancy cuts. Get yourself a 3-4 lb. 100% grass-fed dry-aged chuck roast. The home-to-Mama flavor in the forequarter gets my vote every time. Rehydrate 6-8 dried New Mexico and/or Guajillo and the same number of thin Arbol chilies in boiling water for an hour. Set peppers aside to cool, remove seeds and skins (flesh can be scraped off with a spoon). Skins will knock you out of competition quicker than a horned frog on a hot skillet. Cut your meat into 1/2″ dice when it is half-defrosted, toss with a mix of ancho and chipotle powder, season with salt & pepper and sear over medium-high heat in a thick cast-iron pot till nicely browned in pork fat or bacon drippings. Add a diced large onion or two and 6-8 cloves of finely chopped garlic, stirring frequently until until onions turn clear with some color. Add 2 T cumin, 2 T smoked paprika, 2 T oregano (Mexican if you can find it), the pepper flesh, a hearty beer and half of the pepper water, reserving the rest if you want to add heat later. You can add volume and sweetness by roasting fresh red peppers till the skins blacken and slip off when cooled. My friend John fire-roasts jalapenos on the stovetop and tosses them in seeded, skinned and chopped. Scott uses whole canned chipotles in adobo sauce. Some folks will add a scorching habanero (aka Scotch Bonnet), meaner than a scorned woman. Please no green bell peppers. Leave those to the Bengals fans.

Beans, considered a chili staple by many, were a later addition, enabling the wagon boss to “stretch the pot” for immigrant labor crews building the railroads or cowboys with collars turned up against a howling “blue norther”. To this day, beans are frowned on by many competition judges. I like to add a pound each of dried black beans and pinto beans that have been boiled then simmered for an hour in salted water and drained before going in. Add water to cover, 1 or 2 cans of tomato paste and simmer for 2-3 hours, adding water as needed to prevent sticking. Taste as you go adding cumin, salt, paprika and/or some Cajun spice with cayenne depending on your taste.

You can thicken the chili before serving with masa flour whisked with water to smooth consistency before being added to the pot. Masa is traditional Mexican corn flour that has been soaked in lime(stone) water, cooked, steeped, dried and ground. The alkaline processing allows the kernels to be separated from the gluey hulls, adds calcium, makes the niacin nutritionally available and imparts wonderful traditional aroma and flavor. If you have any bitter flavor add a little brown sugar. Some people like chopped fresh cilantro stirred in right at the end.