The Gates of Heaven Cupcake 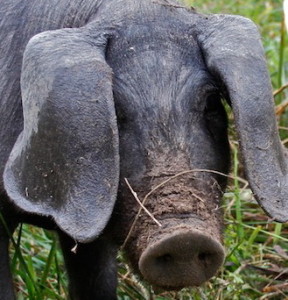 The Gates of Heaven Cupcake

Bacon is about as controversial as kissing a baby. Often described as the Magic Johnson of food, the cured and smoked belly of a proper heritage breed pig achieves the “Gestalt” genius of a harmonic whole that is greater than the sum of its parts. Salty, sweet & silky as a Lou Rawls love song, great bacon is reminiscent of the charismatic leader of the mid-80’s Los Angeles Lakers teams. Bacon stands alone as a superstar with the ability to bring out the best in surrounding players. A fearsome scoring threat with incredible vision and ball handling skills, Magic would dazzle the opponent while getting quality chances for the talented cast around him. He could draw defenders and then find the open man for an uncontested basket. He inspired other components to deliver a memorable dish with championship results. Bacon is like that – a trip to heaven without all that hassle of dying first.

With the goal of showing Farmers Market friends how our bacon “goes both ways” (sweet and savory), we served up two tasty treats this past weekend as a fundraiser for our friends at South Kingstown Community Garden – www.skgardens.org – where more than 30 people sustainably feed their own families and others with organic vegetables raised free from pesticide residue and glyphosphate. The garden, now with a tool shed and drip irrigation throughout, is in its fifth year of cultivation. Excess produce is donated weekly to the Jonnycake Center where it can be enjoyed by our less fortunate neighbors. We support this important volunteer organization in the interest of food security and showing people that eating good wholesome food is not the purview of the rich.

On Saturday we shared fellowship with a few of these green thumbs at our Farmers Market booth while offering $1 tastes of my own maple-bacon mini-cupcake (sweet) and my friend Ann Marie’s sweet potato – lentil fritter with bacon and chipotle onions (savory). Our $55 donation launched our marketing initiative to build broad-based support for our local natural pastured meats through personal recommendation by Community Garden members and friends.

Our “Gates of Heaven” cupcake recipe came from the Bacon Today website and featured our amazing slab bacon from Large Black heritage breed hogs raised for us by 16th generation Maine farmer Ray Buck. Known for producing moist, succulent meat with unrivaled flavor, the Large Black is an ambitious grazer ideally suited to pasture production that retains the traits of its British ancestors. They are highly regarded for their hardiness and docile temperament but do not take well to confinement and fell out favor when commercial production intensifed and moved indoors after World War II. Listed as “Critically Endangered” by the American Livestock Breeds Conservancy, they have made a comeback over the past twenty years on family farms growing artisanal pork for a discerning customer. They are sometimes crossed with other heritage breeds since limited gene pool has created some challenges with outward expression of undesirable recessive traits.